‘Happy Birthday’, I wished, hoping I was doing the right thing.

Even if I wasn’t, I wasn’t corrected. Relaxing in the assumed right air, I waited wondering what to type on the hovering window of the messenger.

I didn’t want to make wishes that I knew would remain wishes. Not this time. Not ever again.

Choosing words carefully, I made an almost reverential wish. One about dreams, hopes, fears and finding love.

‘Thank you’, blinked on my screen.

‘What gift would you want?’. I typed ritualistically.

I took out the pen from my mouth. I had to purse up my lips and that isn’t best done with the lean finger of the pen held horizontally between clenched teeth.

‘Ok. I’ll wear the kurta and churi from the shop we liked.’ Favorite, I think. Girls in western wear was never a favorite.

I hear the vanishing sound when a person leaves.

Opening my cupboard, I looked for the black and blue kurta I had in mind. Inside it was placed a blue shawl. Taking it out carefully, I put it away for another day.

I do not know how many kilometers it is from here to there, but I do know that it cannot be covered in an hour.

I hope you had a good dinner. I hope she wore an elegant dress of your choice.

Sunshine, flowers, butterflies and birds;
Darkness, candles, soft and special words;
From see to sense to touch to feel;
A sense of belonging, every lover’s dream.
Happiness in conversation, comfort in silence,
Solace in togetherness, a divine confluence;
Maybe a kiss or a hug or simply a fleeting look;
Each time, the emotion, privately understood.

How can someone rely on someone else for their own happiness? Waiting and longing for his arrival. His smile made her happy and his words made all the difference. Finally, the door bell rang. The wait was over at last! She opened the door to see his smile and hear the words she was dying to hear, “Miss, your double cheese burst pizza” enjoyyy!

P.S- Inspired by a conversation with another M:) who loves pizza!

She was six. But her best buddy was closer to thirty. They chatted, played and bonded like they belonged together. Akin to a mother and daughter. Except they were not. She fondly called her MM. People would ask what about when MM gets married? Phat came the reply, “I’ll marry her son and go live with her!”

P.S- This is inspired by a conversation I had with my niece! 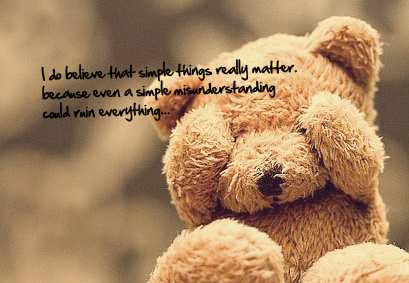 Like Loading...
My heart skipped multiple beats at once but then the car braked and I realized , I was in the train and , unfortunately, about to arrive at the station. Life is tough if you are reading a suspense thriller and happen to have never ending work through the day. 24 hours seem too less for a day. For next 10 hours my eyes followed the usual sights, my brain mechanically responded to others but my mind was with Lisabeth Salander- facing a life threat in a remote place. That brings me to the question, I intend to ask here.
Have you ever seen a murder? Or a suicide? A really bad accident, an attack or may be a narrow escape from death …an armed revolution, a terrorist attack or a  war? Come to think of it ,how often do we go through such dramatic moments . Not very frequent ..isn’t it? But we love to read about them, love to watch them on TV/cinema screens .It is a sort of simulated kind of pleasure. A sensation of things going terribly bad combined with the relief that its only fiction . Probably that is why we love watching horror movies too. Of course we knew there are no evil spirits on the loose, while watching the movies at night – but the sleep was disturbed anyways . Have you ever thought how you’d have reacted if such incidents actually happen to you. I was thinking about it since last few days for no particular reason .

We all have some stories that remain glued in one corner of our mind for ages. Stories that haunt us in contemplative moments, stories that come back to us unexpectedly ….stories for which we yearn for a different ending (or may be not). There is a good genre of fiction which weaves stories with completely unexpected endings. I can think of reading O’Henry and Roald Dahl. They wrote stories that make me jump with the sudden turn of events . Sometimes a subtle unveiling of facts turning the happenings upside down and at others , a tale coming to a dramatic climax just to turn back in the last sentence . I do not generally read racy thrillers or pulp fiction so I am not really use to increasing heartbeat with the turning of pages. But recently, I made an exception . I was reading millennium trilogy by Steig Larson . I would confess that I read these books mainly because I was fascinated by a very unusual heroine –Lisbeth Salander , a hacker with tattooed body and almost anti social attitude . Surprisingly, the books made me realize (once again) the need for drama in life . If not real, at least virtual.
Hitchcock once said that –“Drama is life with the dull bits cut out.” To paraphrase : Life is drama with a bad editing and unwritten climax . Of course we love it that way. Mostly, we rue the fact that the ending is not for us to decide , but we love it nonetheless. A life without a dash of conflict and colour will not be a complete one. Indians specially love the drama in life. Look at our takes on very minor issues of day to day life- drivers yelling in traffic jams, women bargaining with vegetable sellers , children throwing tantrums, colleagues gossiping with full concentration, housewives watching tearjerkers and politicians giving speeches. Its not hard to find drama in real life . But that seems to be insufficient for us. We search for heavier doses of it in fiction and gossip.
Interestingly, its often the tragic tales that stick to mind most unknowingly . I remembered a story that has managed to haunt me for years. It was a short story by Tagore where an eccentric old man wanted to hide his wealth for his long lost grandson and decided to bury a child with the money, to guard it as yaksha . He found an orphan on street and decided to sacrifice him for this work. In the end this orphan turned out to be his own grandson . I cannot imagine the plight of that old man. I can’t help thinking “what if…”. Then I thought of a Prakash Jha movie titled Parinati. Something similar to Tagore’s story – here an innkeeper and his wife were convinced by a merchant to give away their son . They did it so that the son will get education, they can’t afford , but could not help missing him badly. The merchant had promised to send the son back after he is settled in life. The couple started mugging and killing the travelers staying in the inn so that one day they can pass on wealth to their long lost son. One day a charming young man comes from the city and they kill him too. Only to realize that it was their son who wanted to surprise them.
The story never died in my mind. I have no explanation why. I cannot say I haven’t witnessed such drama in my life, but I wonder how people survive such incidents. A crime committed on you may be still easy to forget than the guilt of doing something terribly wrong ryt. Losing a loved one accidentally or by your own mistake must be horrible to live with. Yes, it is great fun to watch murders and mysteries in the movies but I am very sure it would be devastating to live through any such real life drama . I know of a friend who lost two of his friends(one happened to be my best friend) to an accident while he was on the wheel. To this day, I know for a fact that he hasn’t had good sleep because he blames himself for what happened. I shudder sometimes thinking how he would go on.

It is funny that when I am trying to recall the stranger than fiction moments of life, I cannot think of anything happy. Is it because we take our blessing for granted and fail to see the magic in it ? Why is it that life’s drama is most visible in fights and deaths…in struggle and defeats and not the other way round . Many of us will remember the TV  images of twin towers burning or the attack in Mumbai but would not remember the face of a person who fought death for 6 days while being trapped inside a mine!

Why should drama be always tragic?In Indian classical plays – essentially woven in a background of love and mistaken identities, the stories always ended happily. The good triumphed over the evil . So why does our mind carry tragedies longer than it should. Why can’t we in life too choose the genre of the drama around us . I have no answer to that question. But if it comes to choose- I know my choice would definitely be a Rom Com for life around me or Sit Com may be??! 😉

The wait is long, too long especially when it gets closer. You keep waiting for it to happen all the time & once it actually does, it gets over even before you realize. In a way, a weekend is so much like those relationships. Happiness that is shortlived  and cravings that are eternal.

My heart skipped a beat or two when I first saw you.
Your very presence brought a smile.
I wondered how you had gotten here and who could have conspired to get you here to me.
I was curious and happy, mixed emotions.
Your father felt the same way, he told me so!

P.S-(For someone who bought a ray of hope to many people right from the minute she was born. To Lilian)

She was on her first vacation when they met first. They ate, drank, travelled and eventually slept together. The next week, she left for home without any promises of another meeting, disappointing him. “How was your vacation” her husband asked as she unpacked. “A journey into an alternate universe” she replied with a mysterious smile. Once upon a time

Add blog to our blog directory.

This work is licensed under a Creative Commons Attribution-NonCommercial-ShareAlike 2.5 India License.